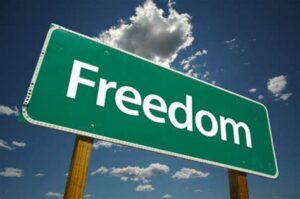 How exciting! In just a few short days – this Sunday, July 4th, we will celebrate “Independence Day”. It is the day we set apart from all others, to observe the anniversary of the birth of our nation. It is the day America declared its Independence. Independence Day commemorates the signing of the Declaration of Independence and the establishment of the United States as a sovereign nation.
On July 4th, 1776, 56 of the bravest men who ever lived, signed the document known as “The Declaration of Independence,” declaring independence from King George III and the government of England. That document, as we know, came to be the stepping stone for the United States Constitution, which was signed just a few years later in Philadelphia, in 1787.
The Constitution is one of the most important, if not the most important document ever adopted by a nation of people, for in the writing of that document, those men passed on to us, a set of rules and guidelines which if followed, would lead America to become the most blessed nation on earth. Let’s be reminded this week that those 56 men who were willing to sign the Declaration of Independence did so at tremendous cost to themselves. Many lost their lives, most lost their properties, and all of them lost certain freedoms in order to give us ours. So, it is proper and ftitting that the least we could do this weekend, is to take the time and remember, honor and celebrate our freedom as citizens of this great country.
As we think this week about our earthly, physical freedom, I believe that God also wants to remind us that He created us to be spiritualy free. Sin however, has brought us into bondage and slavery, but the great news is that God sent His only begotten Son to earth to set us free. Jesus said in the Gospel of John verse 36, „So if the Son sets you free, you will be free indeed.”
Praise God that no one has to live in sin’s bondage – they can be set free! To be free is to have the chains of sin broken and have your prison door opened – all because by faith you’ve accepted Christ’s sacrifice on your behalf. It is to no longer have to live in the slave house but to live in the Father’s House. Instead of enduring the burdens of being sin’s slave, you get to enjoy the blessings of being God’s beloved child.
So, are you free? Is there also a personal “Independence Day” on the calendar of your heart? If so, then my friend, you have a double reason to celebrate, if not, I enourage you to call upon the name of Jesus and be free. I’ll leave you now, with the words of Bill and Gloria Gaither, from a song that is very dear to my heart.
So long I had searched for life’s meaning,
Enslaved by the world and my greed;
Then the door of my prison was opened by love,
For the ransom was paid, I was freed.
I’m free from the fear of tomorrow;
I’m free from the guilt of the past;
For I’ve traded my shackles for a glorious song-
I’m free! Praise the Lord! Free at Last!
From my family and I – Happy Independence Day to you all!
Pastor John